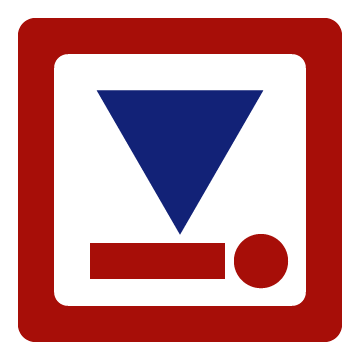 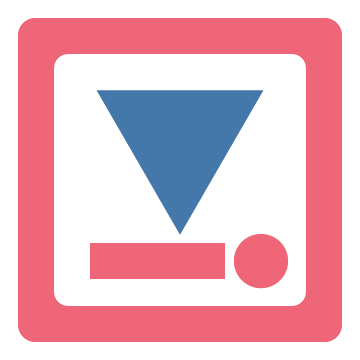 After finishing up the first version of our Solar System transit map, we went looking for another vector art project - something to further hone our skills, and ideally something that would also be of interest to someone other than ourself.

We fairly quickly settled on recreating the “Semiotic Standard” icon set. If you don’t know what that is, that’s okay! You’ve probably seen part of it before now, but not many have heard the name.

If you’ve seen the film Alien, you may have noticed, here and there in the various compartments of the commercial towing vehicle Nostromo, various icons - squarish things, done in blocky colors, that seemed to be indicating different features of the ship.

You may not have noticed them, too! They’re not called attention to at any point in the movie; they’re just there, implicitly expanding the narrative in the best science-fiction tradition. Their presence says that these ships need to be comprehensible to crew members who may not share a language, who may not be familiar with the particular vessel on which they happen to be, who may be dealing with a life-threatening emergency and need to be able to find things right now. And, like many examples of this implicit sort of storytelling, they’ve drawn a degree of attention in their own right, quite aside from the larger narrative in which they are embedded.

It turns out that Ron Cobb, the production designer for Alien (and lots of other films!), put a lot more thought into these icons than is evident from their use in the finished film. They belong to a set whose full name is the “Semiotic Standard for All Commercial Trans-Stellar Utility Lifter and Heavy Element Transport Spacecraft”.

That’s a wordy title! And it’s a little odd, too, from our perspective; semiotics is the study of relationships between sign and meaning - in particular, it’s the study of how different circumstances and perceptions result in the same signs meaning very different things. The concept of a “semiotic standard” is therefore vaguely oxymoronic on its face, and certainly a term we’d hesitate to use in describing a set of signs whose meanings are intended to be as invariant, and thus not really subject to semiosis per se, as possible.

But that’s just the title. Happily, from a design perspective, the signs themselves are pretty good! Their simple, blocky designs are reminiscent of real-world symbols used to inform and warn, but they’re different enough from those real-world warning signs to offer the pleasant frisson that comes with softening the boundary between reality and fiction - even if the particular fiction for which they were created, and from which they’re latterly drawn, is itself not the most pleasant in all respects.

Too, there’s a hint of the same oddly appealing retrofuturism that so informs the early acts of 2001: A Space Odyssey. But where 2001 shows us a sterile, freshly vacuumed and polished vision of elite white male humanity’s future in space as mediated by Hilton, IBM, and Pan Am, Alien gives us a much less squeaky-clean, but much more plausible-feeling, look at that same future. Nostromo feels lived-in in a way that none of 2001’s spacecraft manage, and Alien, unlike 2001, isn’t afraid to admit to its audience that, even hundreds of years hence, management will still fuck over labor.

In any case, for more on how these icons fit into Alien as a whole, and on that film’s typography more generally, we can recommend Typeset in the Future’s Alien article. But ever since we noticed their presence in the film, the icons themselves have fascinated us. So, when we remembered that Typeset in the Future also had scans of the original sketches from which the icons were derived, we realized that our next vector art project had found us! 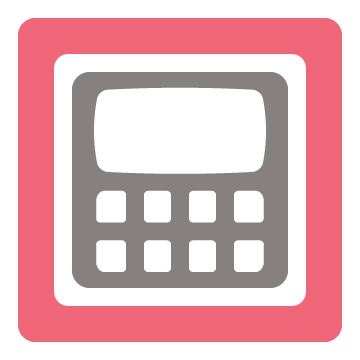 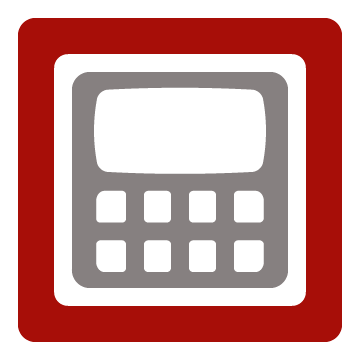 We decided to start by replicating Cobb’s original icon designs, as the “Semiotic Standard Base” set. We have ideas for a goodly number of additional icons, representing conditions and things that aren’t covered by the initial set - fire and atmospheric hazards, for example, along with area types like “science” and “archive” - but it seemed like a good idea to do the original set first, both to get a better grasp of the existing design language before setting out to expand upon it, and in order to produce something that people could actually use. You know, if you want to!

We also decided that it doesn’t make a whole lot of sense for these icons to represent information purely by means of different colors - for example, the organic and non-organic storage icons differ only in the color of the innermost square. Given the purpose of the designs, it seems odd that the finished results should be so easily confused by people with differences in color perception. We could assume that Weyland-Yutani, which seems (per Aliens) to be either de facto or de jure in charge of licensing flight personnel, considers colorblindness to be a disqualifying factor. But here in the real world, we haven’t reached quite that extent of megacorporate capitalistic dystopia! Probably. Yet. So we decided it would make sense to provide a recolored version of the icon set, using a palette suitable for as many varieties of altered color perception as we could manage.

So we have a few things already done. First, there’s the full set, as PNG rasters at a suitable size for use as Mastodon emoji:

The emoji set with default colors

The emoji set with alternate colors, designed for use with color vision deficiency

(To add these to your Mastodon instance, download them and import them via tootctl emoji import, or ask your friendly local administrator to do so. Pleroma, and other fediverse software, can probably do the same thing, but we have no idea how.)

Alongside those, we have the full set as SVG vectors, suitable for incorporation into your own projects, or for print reproduction at scales beyond what the PNGs can support:

The SVG set with default colors

The SVG set with alternate colors, designed for use with color vision deficiency

We’ll be releasing the “Semiotic Standard Extended” set, with the additional icons we mentioned earlier, once we have enough of them done to feel like it’s worth putting a package together. In the meantime, we hope you enjoy these!